You’ve heard of the new Tea Party in the US? My next Guest Star has taken it to a whole new level.

This brave young man is staging a one man STRIKE in Dublin about a scalding topic. He’s on a TEA MAKING Strike– that’s right, folks, it doesn’t get any hotter than this!!

I’m standing with him in the streets of downtown Dublin, outside his Union House.

Let’s see what drove him to this drastic measure… 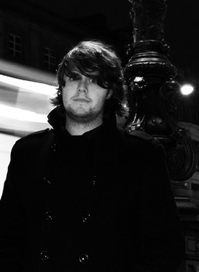 HDYGT: You realize you’re leaving all the poor tea drinkers to perish? What will we all do at tea time?

David Maybury: Someone else’s problem. I’ve decided to devote my life to the children of the world. I’ve written a children’s book, which comes out in May 2010 called “Haberdashed”, and I’m also the new co-editor for Inis Magazine, which is REALLY nice!

HDYGT: I suppose I should congratulate you for your amazing success, but… For God’s sake Man, WHO’S going to make the TEA — it’s almost 4:00?

David Maybury: I’m also a judge for the Children’s Books Ireland Bistro Book of the Year, which is like the World Cup of Irish Children’s books—

HDYGT: (shakes David by the shoulders) Stop judging the CHILDREN! You see what this mad tea-making strike has done to you?

David Maybury: Leggo of me, lady!

HDYGT: I’m telling you, Ireland needs you – I need you – I love my tea!

David Maybury: I’m done with it, I tell ye – finished.

HDYGT: From the looks of your outfit you must still have some feeling left for the ancient art?

David Maybury: You like it? I’m told the official Ylang-ylang-and-thyme-wrapped- in-teabags-head-dress brings out my dashing good looks, without upsetting the delicate balance of my boyish charm.

HDYGT: (wonders which bloomin eejit told him that) Look, you’re not thinking straight. I can see you’re upset.

David Maybury: Well you’re no daisy toting peacenik yourself, there.

HDYGT: OK, you’re right. I’ve allowed my love of tea to get in the way of serious reporting. Perhaps we can negotiate. When did this irrational tea-hatred begin?

David Maybury: I suppose it started ten years ago, when I was 16. I worked for Poetry Ireland during what we call our Transition Year, where students work in the business world.

David Maybury: I was a general lackey at the time, aka Chief Tea Maker— but I wanted to write.

HDYGT: (sighs) Such talent at such a young age…your tea must be sublime.

David Maybury: (shrugs) I won’t kid ye, I was something of a prodigy…and I’m still very active with Poetry Ireland. I do Media, Communications, Tech and I’m a Contributing Writer, but I WON’T MAKE TEA! (pounds fist into palm) There are labour-law issues at stake here.

HDYGT: Why in the name of Earl Grey would you give it up?

David Maybury: Because I love books. I started reading at the age of three.

David Maybury: I love the people in the writing community – the authors, organizers, booksellers, librarians, teachers– everyone I’ve met involved in children’s books has been great fun. I like talking to kids. They’re brilliantly odd, odder than they were in my day.

HDYGT:  (eyes wristwatch– 3:56 pm)  All good points but what makes you certain you’re better suited to writing than say… chatting with people while making tea?

David Maybury: You mean other than my dashing good looks, quick wit and fabled charm? The occasional good story, and a bucket load of persistence.

David Maybury: I read an awful lot of books. Reading is just about the only way to be a good writer – learn from the best!

HDYGT: Touché, but have you had as much training as a writer as you have in, oh…I don’t know…TEA making?

David Maybury: I was a news reporter for the European Commissioner, which basically meant I had to synopsize the news for the commissioner and his office. Mr. McGreevy and his team would wake up in Brussels at whatever time they do – nab themselves a croissant and some Orange Juice and then read my version of the important news of the day. Like a handy ‘HitchHikers-Guide-to-Knowing-Everything-That-Is-Going-On-At-Home-To-Make-It-Sound-Like-You-Are-There’

HDYGT: That helped you become a writer?

David Maybury: Not really – the lovely thing about writing is that it runs parallel to everything else in your life: Looking this good (and writing). Making tea (and writing). Working full-time, studying for a masters’, dating the love of your life (and writing).

HDYGT: So the sad truth is, you’re just not the tea making type… Ink spills rather than tea stains are to be on the desk of an ingenious guy such as yourself.

David Maybury: I suppose so. Working with the Poetry Ireland Writers’ in the Schools Scheme has been a great encouragement – meeting other great authors who’ve pushed me along. They’re a pushy lot them writers.

HDYGT: Tell us about your book.

David Maybury: “Haberdashed” is the working title, though it’s potentially due for another name change. It’s about an escaped lizard who may or may not be able to level entire cities in the blink of an eye. And of course it falls to the smartest people in town to catch it – two 12 year olds.

David Maybury: I’ve got a blog about writing, and children’s books – with the occasional competition and giveaway to boot.

David Maybury: I think the only way to get anywhere – no matter what it is – is through persistence. If you’re not good – you practice then try again.

HDYGT: (pulls empty tea cup out of pocket) Try again, huh? How about making us a nice pot of tea?

David Maybury: I’m not playing– make your own tea!

15 thoughts on “Interview with David Maybury”